An Essay That Should Be Read By Everyone. 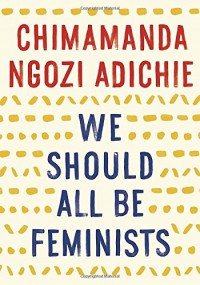 Earlier this month, I attended a book discussion 'Purple Hibiscus' where I did not read the book. Chimamanda Ngozi Adichie had written 3 novels and a collection of short stories. I wasn't into the books she had written despite the praises from other book readers. I was more interested on her essay 'We Should All Be Feminists' and when I read the reviews and the praises and how it changed the view of a reader to become a feminist, I am curious and went ahead, read it at one go on my way home riding a light rail train.

Here's my honest opinion - this is probably one of the best essay I have ever read. Her words got me thinking but also some of her questions was what I question before some years back. She brought up some strong points, questions that should be laid out in the minds of today's gender equality. I do agree - human rights isn't the right word that equals to gender equality. We are living in a world, given the perception and the norm that the world should be given to men because he is a man, not women because we were raise to believe women should be stay-homed moms and take care of men's needs. I do agree it is wrong and in fact, I did see the change happening around us but we still have this inequality happening because of gender even though when a female has the same highest learned education but given low pay. What Chimamanda pointed out is right - even today in the 21st century we are still living such inequality.

What I like in her essay is how true she had said. She pointed out that the way we raise our children our beliefs that boys should grow into masculine men and girls should learn to cook for their husbands, bound by marriages because our parents belief is to be true and a fact. She pointed out that culture does not make people but people make culture. She pointed out that we should raise daughters differently as much as we should raise our sons differently too. What she had written is the truth. What she had said in TEDx talk is an awareness to all. And this is what we should be - the true meaning of feminist we all (male and female) should be a feminist.

Although what she had pointed out I do agree, I felt there is some thing missing. Some thing that, although her questions had been the ones she laid out, I didn't find it as a realization. I had asked these questions before to myself. I had asked these questions to people I am acquainted and yet they have no answer. It is true - this book really will change the view of the norm. I am living surrounded by the norm of people whom are too comfortable in the way they grew up. As an Asian, its how we were taught to believe. I am glad it was different for me. Still, I can't for the help of any thing felt there is some thing still missing in her words. Maybe her views on equality was her experience, which she mention a plenty, is the way of life Nigeria for men and women always have been. But it was some thing I felt missing that did not give me that kind of impact that I would give a 5 star rating instead.

Nevertheless, We Should All Be Feminists is a well said book. We all should be a feminist (point taken as how the definition is in dictionary) and not the hearsay or assumption many people thought feminist is. Not to mention, the ones that abuses the meaning of it. Everyone should read this book so that everyone (male and female) truly know the true definition of it.