The Elegance of an Immortal Samurai 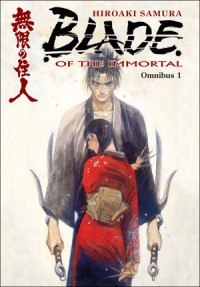 I love the romance of the samurai edo era, especially when it comes to Lone Wolf and Cub, where to me to this day is the best ever written and drawn samurai manga ever published. What is an epic tale of revenge and honor in Lone Wolf and Cub and what is romantic meiji swordsman story in Rurouni Kenshin, Blade of the Immortal makes up what little essence of those two into an elegant beautifully drawn manga by Hiroaki Samura. The first time I read it, I did not really enjoy it but some how after more than a decade over, I am drawn by its beauty. Finally - an omnibus edition was recently released and it collects the first three volumes published by Dark Horse. It was the second time around rereading that now, I do appreciate it.

Enter Manji, an immortal samurai that just can't die. Literally he can't. He wanted too (either by poison or decapitate his head) and and so he vowed to kill a thousand men. So he is immortal for years unknown how many and his only sister were killed and he has nothing much left to do. When a sixteen year old girl name Rin hired him to be his bodyguard on a quest of revenge to kill Kagehisa Anotsu and his Itto-Ryu clan, Manji might reached his goal.

Blade of the Immortal has a slow introduction start. We are introduced by the characters in the first volume Blood of a Thousand that followed with second volume Cry of the Worm and finally ends in the third volume of the omnibus Dreamsong, which pretty much sums up a lot about why it has been a popular cult hit among manga readers. For one thing - I am mesmerize by the artwork. The fine lines and tones and speed lines just makes it right for the atmosphere and the following eye movement while reading just makes me comfortable. What was even a beaut is the splash-page kill shot that Samura had take the effort to draw it that can be a good poster pin-up on a wall. With such art, its not wonder manga readers like it.

The story on the other hand isn't much, which there's plenty of dialogue to go through that at times, it can be a hassle. There are moments that it is ambiguous that you need to figure out what it means. Don't expect an all out action or some thing epic from it, but I do understand it is a fitting reasoning why its meant to be told that way and slowly too. While the layers of characters are unfold slowly as the story progress, I can't help but to wonder whether there are side-stories that might just turn up and progressively kills the story mid-way.

Blade of the Immortal is not a bad read and certainly eye-candy when it comes to art. I do not mind now to follow the series until the end (it completed its run) and with an already released anime and now this year's upcoming live action adaptation movie to be release with Takuya Kimura as Manji, Blade of the Immortal will appeal who love elegance and beauty with a slow pace of a good afternoon tea.