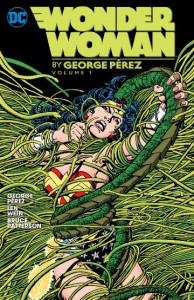 In 1985, George Perez, Len Wein and Bruce Patterson redefine Wonder Woman with a new beginning after Crisis on Infinite Earths, a crossover where DC heroes in one too many alternate universe converge into one. Origins were rewritten and in the case of Wonder Woman, it was some thing unexpected that takes you on an epic journey that re-imagine a truer superhero with a proper story line and a better plot.

Collecting issues #1 to 14 series 2, a new origin of how Princess Diana (a.k.a. Wonder Woman) was born with a back story of how her mother, Hippolyte, an Amazon warrior whom worship the Greek Gods betrayed by a demigod man named Heracles (son of Zeus), whom abused Amazonian women to men's desire until broke free and escape to Paradise Island. There, Hippolyte had Princess Diana, born out of clay and soon were given a mission to man's world (or the only travel to man's world is Boston) as ambassador to spread peace and teach equality among mankind. Along the way, Princess Diana battles God of War Ares, live among mortals and learn about mankind ways and been given the challenge of the Gods by Zeus himself to prove she is worthy as a warrior.

Yes, you must have wondered - Wonder Woman is a feminist. And that is true because the idea behind the redefining this character was meant to be as one.

What I read here is truly an amazing read. For one - the flow of the story never miss a beat. It has this steady flow of characterization that I find romantic in telling, more importantly how these characters were introduced so smoothly, it became an epic journey of well-told origins of a superhero. Secondly, there are some chapters in the story that, unlike most comic book series, explained well of the mysteries that was a plot filler complete with significant situations that completes the empty gap in the story that is strong and acceptable. For instance - Wonder Woman's costume. Have you ever wonder why she wore those skimpy outfit? You will be surprise to see its origin that does not offend any female readers. And of course - lastly the reading experience. Its such words written in each panel, it really does take a long time to complete at least a chapter of 32 pages. I mean - its filled with so much words, some times you might missed out some of them in other panels. For the price I paid for, that's worth every single money I spend on!

The artwork, of course, done by George Perez is one of the best. I always love George Perez for its sheer detail artwork and its beauty and patience of penciling. There is no laziness nor any computerized digitized artwork done in every single page ever. For me, its a bonus reason why I bought this book mainly because of him. Included in this volume is also a biodata of four significant characters plus a few pages of gallery collected tradepaperback covers worth looking into.

With a summer release 2017 of the live-action film version of Wonder Woman, if you never read a single Wonder Woman comic book, pick this one up. It will surprise you and change your view what you thought comic books were, this definitely on the same ranks of any well-written books without artwork should be appreciated. I can safely say, this is a series I will pick up with volume 2 arrives later this year.