The Life and Death of Martha Washington 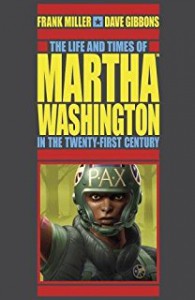 The first time I read Give Me Liberty, it was in the late 1990s. I was working as a sales assistant in a comic specialty shop and the owner had actual copies of single issues of a very hard to find mini-series. It blew me away after I read it and I never thought how beautiful Martha Washington was, that strong female leads do make a difference then. It was then, I did not follow up any of its sequels... until the release of The Life and Times of Martha Washington in the Twenty-First Century was released, a complete chronicles of her life since birth until death.

Re-reading Give Me Liberty was so refreshing. If there is any thing about Martha Washington that she was born in 1995 in a ghetto so poor, that the US government housed these poor people into what was meant to be a social welfare but turns out to be a prison. From there, we get to know how smart she is with computers. Right up to the 21st century, the world that we know of is different. Its a different Earth and its a mess-up one. But do not get me wrong, I love how the creation of this universe is and with Martha Washington in it, you will understand what Give Me Liberty really means.

After the first series, the sequels came in (Martha Washington Goes To War, Happy Birthday Martha Washington, Martha Washington Stranded in Space, Martha Washington Saves The World & Martha Washington Dies) and what was a brilliant created universe from Frank Miller and beautifully drawn by Dave Gibbons, the same award-winning creators of DC's The Watchmen, every thing just felt spiraling down hill. Don't get me wrong, I do enjoy some bits and pieces of it. I can see the evolution of change in the art from the earlier days of when Give Me Liberty was published in 1990. It was much later that I felt the consistency and the beauty of the art was gone. Same goes for the sequels that felt more like fillers. Until towards the end, was it a fitting ending? Well, to me it already felt what was kept as a universe that is messed-up truly stays true and that is more than enough to enjoy reading it.

Martha Washington is a strong female character that truly is a rarity at that time for female leads in the comic industry then. She was the Ellen Ripley of the Alien universe - strong, brave and justifiable. Besides Wonder Woman, Martha Washington was the only female comic book character that do stands out because of her beliefs and what was written the experience and journey she went through. As the rest of the characters, not many of them stayed long. I always wonder what happen to Raggyann and it was not explained. Still, I am glad I found a copy of this and able to read her whole journey. Thank you Frank Miller & Dave Gibbons for creating such a wonderful series. Without you guys, change will never happen and Martha Washington shows us that change and righting wrong is what hope is.