Where Politics Today Can Be Found In Animal Farm 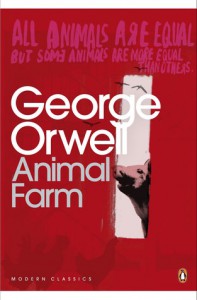 When I first heard of Animal Farm, my curiosity peaks to a point if I should read it. This was in fact in the 1990s when I heard about it. Of course, I didn't read it at all and never even go further and didn't even know there was a TV live-action movie that was released in 1999 or even the 1954 animated featured as well. Straight to 2018 and finally, I read the book. After so many years and I bought it last year, I finally read it for an upcoming book discussion and as it turns out, I didn't really enjoy it nor hate it a lot. I just felt indifferent.

I am sure many have read Animal Farm before. It is this book that George Orwell, besides 1984, he became successful compare to his early writings during his journalistic days. In many ways, Animal Farm is a political book. Reading it on the other hand, it is what transpire of what is happening today. I mean, there isn't any thing I do not know about that will give such value on this book that I do not know of what is happening in today's politics. In fact, I look at all angles and it is a straight-forward adult fairy tale... one that doesn't have a good ending. To me, its more of 'this is what happens when you become ignorant' and 'you don't blame anyone when you support loyally to a greedy swine' than just a story with a good ending. Its an awareness book that was meant as life in totalitarian ruling of the old Russia, when it had its revolution and the rise of Joseph Stalin (I am not sure how many younger generation knows this) and the degeneration livelihood of Russia then. But reading it I can see its almost similar to the world's politics today even in certain countries (I don't think I need to mention which one, if people aren't ignorant on reading news). To me, its nothing exceptional but rather, a representation of what the world was then in politics, its the world that it is now in politics.

Although I had not much complains on the writing, as it is clear and simple and easy to follow, I can't say I do enjoy the book. I mean, I like the writing but not the tale itself. Still, I can understand why it took such difficulty for George Orwellto publish this book but only after
the World War II he was able to, but by that time itself, after his death it became even more popular, although not among critics, read by many and even introduced in literature classes as well. Animal Farm is a book that whether to read or not, it doesn't matter. All around us are... well, we are living in a huge animal farm of our own. As I quote the famous line 'All Animals Are Equal But Some Animals Are More Equal Than Others' is now part of life we are living. We still have, in fact, ignorant people that believe in words of Napoleon of such (we have lots of Napoleons, that swine reincarnates!) every where, this book to me... doesn't make much difference but it can be a discussion worth debating.