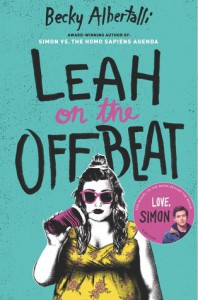 Reading Simon Vs. The Homo Sapiens Agenda makes me smile for a good reason. Its warm, funny and yet meaningful in many ways how I care about the characters. But what makes Simon special was how its written. Then came the spin-off, Leah on the Offbeat, where the central character is Leah Burke - totally opposite of Simon Spier; cynical teenager about how life is for her and how she view things in life that is negative in many ways. While Simon is light and filled with colorful characters, well on his point of view, Leah on the other hand is on what reality is - no fluffy bears but just judgmental on every thing. Its not bad, its just not that better and more of the same but less beautiful.

Following the events after Simon Vs. The Homo Sapiens Agenda, Leah Burke is in the band with Anna, Morgan and Nora, only its falling apart after college is on the horizon and with prom coming, suddenly things just seem to fall apart. Nick and Abby strangely aren't together as always, Morganhad offended Leah with a racist remark and Garrett seems to be in love with Leah, which is isn't. What matters worst is Leah's mum is in love with someone who isn't exactly someone Leah would like to have as future stepdad. And then there is Abby Suso, a girl Leah isn't sure she likes her or not but when things start to question about relationships, Leah doesn't know if he can accept Abby as someone as a close friend... or some thing more.

The beginning is some what unimpressive and it was later on, it slowly picks up. I can't seem to find what was the purpose of this book as it felt like it starts off in the middle of every thing. And then, its pretty much how young adult books are written, only with cynical wit and lots of waffles, cuss words and I-am-not-sure-what-I-want-in-life moments. There are times it is funny, and I really do start to like Leah and the rest of the characters on the later part of the book. But from how it really starts off and towards the end, overall its not that bad. Its just not better. Pretty much normal but in a realistic way. To me, this is a 3.5 out of 5 star rating. If you love the first Creekwood book, you will still enjoy the second, just no better.