A Title I Don't See The Connection With, A Story With Potential But Never Hold Up... 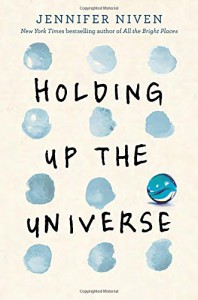 Reading Holding Up the Universe, there are most parts of the book I didn't enjoy and only few I felt there is so much potential to explore but it just didn't hold it up for me. Another, I kept wondering how does this title connects with the plot or even the characters itself.

Libby Strout has a past she wants to forget but she is going to make a difference this year because this year she is making a come back - going back to school. Jack Masselin has a secret - one he has kept since he was six after a fall from a rooftop. When both of them meet, it wasn't some thing that hits it off too well between the two and accepted by others - a girl once dubbed as 'America's Fattest Teen' and a boy who everyone thought knew. But their past has a connection and falling in love wasn't part of it.

There are times I did make a comparison to All The Bright Places, not because of the theme but the way Jennifer Niven writes. Its almost similar in some aspects - every thing falls into place, some of the character's exchange of dialogue feels unreal and the ending feels rushed. Holding Up the Universe has that streak, but towards the end, there's some thing special that really brings out the book - a little hint of reality. While it does cover topics of bullying, cruelty towards teens and the same kind of angst teenagers go through, I can't help but wonder how does this title relates much to plot. Maybe I don't see it but in many ways, how does it relate to it? While for me the first act was weak, I was brought to my attention as to how the author brings out some thing personal and real to the emotions of hurt on these characters. Sadly, Jack Masselin doesn't strike me as a character that has personality, compare to Libby, who has it. Then again, the surface written plot lines kills all that.

Reading this gave me some mix feelings. I can't say I didn't like it but I can't say that I do like it. There are some good parts and bad in this book - for example, Libby is a brave teen that comes out from her own isolation despite how, once, she was shameful about her physical appearance. On the other, there is nothing with strong attributes that gives Libby the confidence with reasons of coming out from her own isolation that she put herself into and going back to school. There are a few others I just can't seem to accept on my own but while the last act brings out the flaws of moving forward after a past, which is a good part that reflects on reality, there are times the weight of the book that is too surface, pulls it back under the sea. Overall - its an okay read for me but for other readers, it might be otherwise.